This story ended yesterday in Iowa. It started in 1965, in a little jazz record store in Streatham, London called 'The Swing Shop'.

Three weeks ago while visiting a girlfriend in New Jersey we went to her dentist appt to a small town forty minutes from her apartment. While in there, I asked if we might see if there was a local used bookstore. 'Oh they have a lovely one in Madison, it's just down the road'. We drove into what looked like a small western Massachusetts town, village-like, quaint colonial type shops, fall colors. The bookstore, Chatham Booksellers, was off the main street just around a quiet corner. When we entered it was like going back in time, a classic small store, old books, antique book smell. Nothing fancy. I fell in love with the store immediately, and I don't read.  Well, I'm starting to try again, which is why I was there.

I was traveling and didn't have any room left in my suitcase. I had just finished reading 'Greetings From Utopia Park' the first book I've read in 2 years, which is about the town I have lived in for the last 35 years and I was going to mail it back home. I only wanted something small and not a hardback. 'Can you please show me biographies or autobiographies?' I asked the woman working by the simple register table near the front door. She told me it was divided into American or European sections. I looked at the U.S. area, the only thing that caught my eye was Patti Smith, but somehow I thought it might be too lofty for me.

I turned the corner to the other side of the bookcase, the European section. All the books were thick and hardback, suddenly a little book between the larger books caught my eye, '84 Charing Cross Road'. I pulled it out. It's a small collection of letters written between an American script reader/writer and the store assistants of an Antiquarian bookstore in Central London. 'This'll do nicely' I smiled to myself, training myself back into reading has to be easy and not intimidating for a while. I flipped the jacket cover to see the price, $2. Perfect. Then I saw the inscription.

I stood almost disbelieving but knowing.

Bob. My best friend and mentor who I met in 1965. His friendship was an education for me for over 40 years until he passed in 2006. This was Bob, I was sure it was his writing, well, a little not so sure, but it was his unique language.

I paid for the book and we left, and didn't take it out again until I moved over from New Jersey to Brooklyn a few days later to stay with my younger son for the rest of my east coast trip. I decided to take a photo of the entry page and email it to Bob's widow Sue. She'd know his writing better than I. In her return email she doubted it was his writing, saying that the B's in Bob didn't look like his, but asked what the title of the book was.

Now this is an interesting part for me, because, despite her expertise, I still had my suspicions. You see Bob was a well known central London figure where he worked at a specialty record store on Shaftesbury Avenue called Ray's Jazz Shop. After the Swing shop, Bob moved on to Collets, which then moved and became Ray's. They were all specialty shops and customers came from all over the world to buy and listen to his knowledge. I followed from store to store, often meeting up at the pub with his music friends after work as I worked close by. Ray's was very much like the bookstore and only a few blocks away. Bob's renowned record collection took up every inch of space in a room in his and Sue's house. Shelves were made to measure to hold his extensive rare and prized record collection, of which he was an unsurpassed expert of its contents, something he was proud of.

But books were a close 2nd in Bob's collecting world. After records, he started buying older books and filling up every nook and cranny that Sue would allow him, and even more that she didn't want him to fill up. Ray's Jazz Shop was maybe closer to 84 Charing Cross Road than any other bookstore, and there were many others in the area. He most certainly would have bought books there.

It was also more than that. Bob mentored me, but he also mentored so many others. He was a letter writer and often sent suggestions of music or books to read. He gave me a few books over the years. Only one survives now, it's soft leather cover is falling from its limbs. He loved giving people a book or poem he wrote. He was generous. This had to be from him. I just couldn't verify it.

After being home for a week and knocking off the list of to do's, yesterday I decided that since I had read out aloud half the letters in 84 Charing Cross to my son in Brooklyn while I was visiting him (our successful attempt at quietly connecting rather than watching a movie), I would send off the book to him so he could finish the humorous true story of transAtlantic letters. As I was slipping it into an envelope I thought of the book and a letter I had here at home from Bob. 'I pulled them out and checked, it was 100% match of signature. No doubt. The B's matched perfectly.

How many billion books are there in all the 2nd hand stores and thrift shops, how many books did Bob give and write inside? How did this book go from his signing it in London to the 3000+ miles over the ocean and end up given away (or sold) to a little bookstore in Madison NJ, The Chatham Bookseller, which I had never heard of or been to? How many 1000's of books, just in that store? But I went to that shelf, to that little book, which I bought within minutes of walking in' and walked out'oh, and the book I still have that Bob gave me... Home Letters, written by Lord Beaconsfield 1830-1852 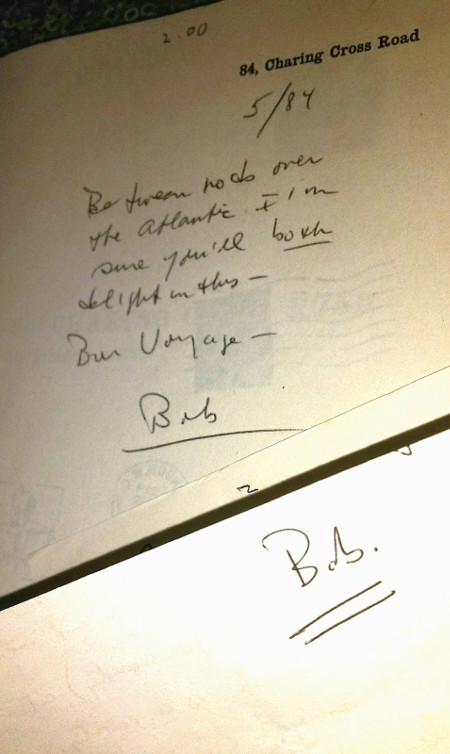